Another hot one. The weathers been pretty harsh and I know we are all feeling it. Best to keep sensible has been my motto so moving runs to mornings where I can. This week I did a Tuesday 12Km Thursday 11Km and Sunday 24km morning run and all pretty enjoyable

Did have a planned fourth run but didn’t manage to get that in and decided anyway to reserve some energy to make Sunday more achievable. My longest run was obagged at just under 2hrs.

Pretty happy with that run. Aiming for sub 5min/km and got that one in nicely . Early run at 5:30-6:30 and the temp is much better. Feeling good even doing it a day earlier than usual. No ill affects from Sunday 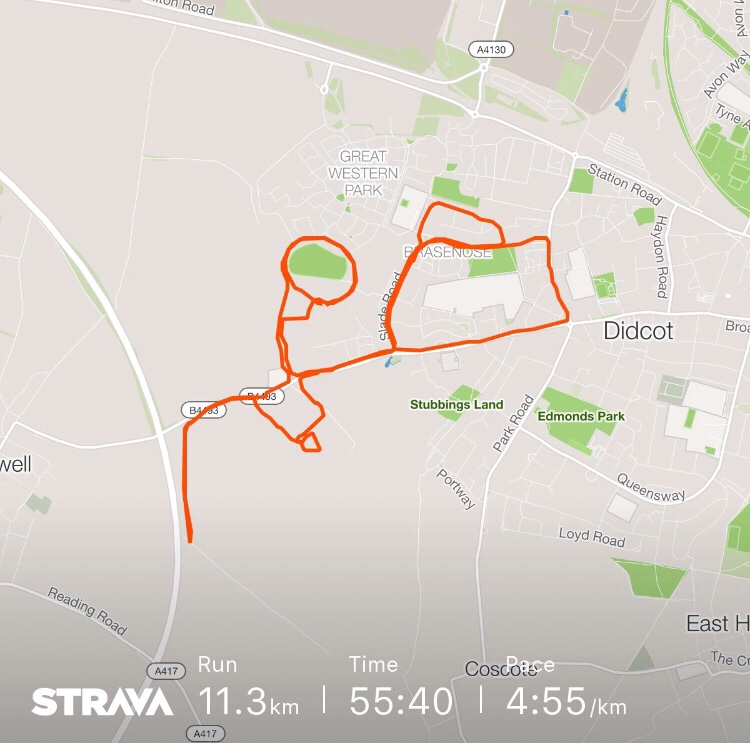 Another sub hour run and again aiming for under 5min/km this being the evening it was much warmer and I noticed that in the run. Tried a new stretch down the side of the new bypass though just before Harwell. Not very exciting so not one to rush back too!!

a wasabi my big go at 24km. I had 2 hours and managed to come in just under. Have to admit I was well chuffed. Really tried to get out as early as possible and up to 18Km the heat was Ok. The last 6 though was a real drain. Paused briefly at turnaround near Ginge Brook and then when I got to the disused railway line at Upton. But otherwise a steady run. Hard but rewarding. Next week will probably drop distance a bit and go for Hilly long runs on the Ridgeway.

It’s the start of the Strava training program for Windsor half in September !! Let’s see how we go 🙂