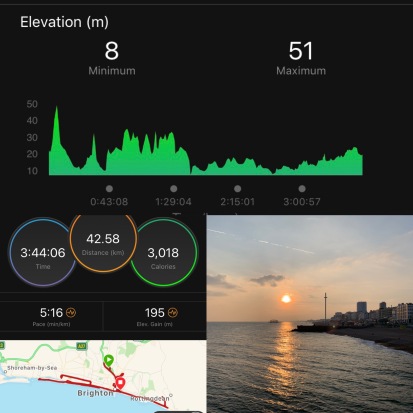 So mid 2017 the idea to start running springs to mind.  The story is in my blog and ‘My Running’ links at the top of the page.  The question is, at what point did the idea – oh let’s run a marathon crop up?  At what point did I decide running 26.2 miles is the act of a sane person?  Well I don’t remember, but I do recall that it wasn’t something I deliberated on for too long.  I can run, therefore I must run a marathon.  that’s how my head works I think.  there’s some logic to it, but in reflection not very much!  The fact I never had run 26.2 miles until the 14th April 2019 is a good reason to think the decision has a certain amount of crazy in it.

Of course a lot of people take part in marathons and a lot of people achieve their goals.  Problem is for, as a runner, I’ve worked out I don’t like doing well.  I always aim to do my best (in whatever I do) but actually in running too much of my brain has this need to feel I’ve not just achieved but achieved well.  that means running a marathon isn’t enough.  I have to get a ‘good’ time, or run without stopping at all or something similar!  that’s just how I’m wired and I guess I just live with that.  it’s normal for me!

So Brighton, well.  I chose it because, well, actually I don’t know that either.  Sounds like I just make this up as I go along!  Anyway, I don’t really know the reason but I could see from the adverts it was large, well supported and by the sea.  it was also advertised as fairly flat, which I didn’t check up before committing!  That said it’s not the hilliest but don’t expect pancake flat if you ever decide to run!  it isn’t!!!!

Marathon start is in the park just north of the station.  Good sized park, well organised start area with well marked bag drop and start corrals.  The first hing I noticed was that it really is a popular one, turns out over 10 000 runners took part in the Marathon alone, not top mention the 10K, shorter runs and bike ride.  So it really is a popular event. 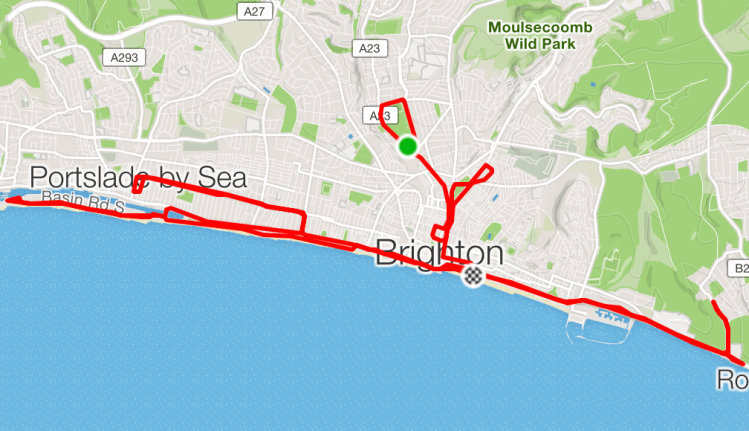 The route is mostly along the seafront with a bit in land other than the start.  Hills wise: 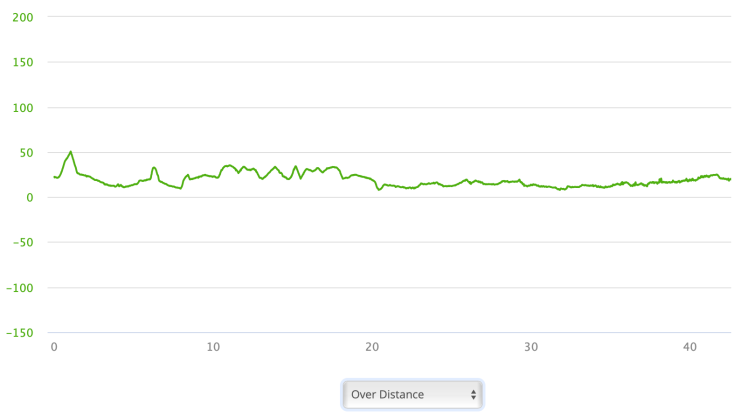 So not massively hilly.  The main hills are the short but steep climbs in the first few kms around the town centre before you hit the sea front.  Being early on they are OK.  They are obviously unnecessary and you certainly wish they weren’t there, but they aren’t the worst in the world.

You then have a steady climb out of Brighton from the Pier towards Rottingdean.  On the way out East however you just see it as a hill, not realising there is a good deal of up and down (the trace above shows this (10-15Km)). So once you reach the turn point and the run back into Brighton, it’s not the flowing downhill run you were expecting, plenty of ups and downs, none of them brutal but all of them a surprise.\

Once back in town just west of the pier is halfway (n numerically – but don’t be fooled!!).  The run then continues a short way along the coast before the cut back into the residential area on an out and back detour,

Back on the sea front and you are at 18+ miles and starting to think you’ve got this sorted.  However, the run down to the power station West of Brighton is the section with least support and encouragement from spectators – there are some but it’s not really got the space for them.  Sadly this section of a marathon for a first timer is mentally tough and I now realise why people say that 20 miles is the half way point of a marathon – it makes sense now!!

What was a real positive was the fact that I knew once I turned at the power station I was on the return run back to Brighton and the pier and that elusive and oh so gorgeous finish line arch.

However, this is where I hit problems.  Let me explain …

I had stashed some snacks and in particular a chia charge flapjack, into my shorts for just this point in the race.  my drink was spent, my energy gels consumed and now I needed my flapjack or Cliff Blocks in my ‘other’ pocket.  Unfortunately I had zipped up that pocket and in my hour of need, the zip was having none of it.  It gave me about 1.5cm of access, enough to stick a finger in, but nowhere near enough space to get my hands on that flapjack.  I have to admit this knocked me off my stride a little.  I was worried that I might need that snack to survive to the end!  and now I couldn’t get it.  I carried on going but was just that bit unprepared for the final part given this unplanned change.

The other thing that caused me problems related to the use of cups.  Now a lot of races are using cups and Brighton is no different, and credit to them for making the move to this for sustainability reasons.  However, it is a more challenging drinking method and each cup does come with a free shower!  I was getting the hang of it , but at mile 25 I was knackered and paused to drink, thinking that it was best to make sure I had that final bit to kick to the end.  WRONG and an amateur mistake I now know.  At that point when everything is aching and shouting at you to please, for the sake of all that is humanity, stop running – DON’T DO IT.  Your body is trying to fool you.  However, amateur me did, and bang the worst cramp in my left thing that I have ever had.  couldn’t move more than hobble to the side.  I felt gutted, embarrassed and disappointed.  But up steps a couple of people to check I’m OK.  And a very generous person who offers to push against my foot with this to help stretch.  Sir you are a gentleman and cramp saviour!  I took what seemed like an age to get over it but I did.  I survived and had a real burst of running to the finish line.

I finished with 3 hours 44 minutes and 7 seconds.  I had wanted under 4 hours so was pleased, but felt I could have been nearer 3 hours 30 minutes.  But I do know that I should be happy with the time I got, very happy – and I am.

One thing I think is clear from the race is that Brighton embraces this race amazingly well.  with the exception of the power station section which is tricky to provide support due to the narrowness of the roads, the support is amazing.  I lost count of the number of people offering jelly babies, oranges, sweets.  There was even a cake stall!!  The crowds are amazing, I thought the Big Half in London was good but this is better, and I really appreciated each and every one of them.  Thank you Brightonians.

Again, the vast numbers of volunteers were great, the aid stations were well marshalled and well announced (water, sports drink etc) and they were all supportive and encouraging – I can’t remember the number fo times I collected a water cup and had the volunteer say “well done” or “great running”.  You were all great.

I loved the support and the volunteers and the comradely of the runners, so many great people out there.

Thank you Brighton for making this marathon runners first experience such an enjoyable and amazing experience.  Every aspect of the day contributed to my experience and feeling of achievement.